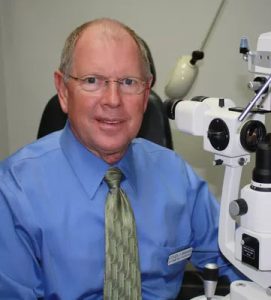 Dr. Bravard grew up in the Chicago suburb of Brookfield, Illinois. He graduated High School from Lyons Township High School in LaGrange, Illinois and then attended the University of Illinois where he attained a Bachelor of Science Degree in Biology in 1966. Dr. Bravard then volunteered for service in the United States Marine Corps where he was trained as a helicopter pilot. Dr. Bravard flew six hundred combat missions in Vietnam and was awarded many military decorations including The Purple Heart and Air Medal with Bronze Star. After completing his service in the Marine Corps, Dr. Bravard attended Southern College of Optometry in Memphis, Tennessee, graduating with honors in 1976.

Dr. Bravard is married to Dawn Bravard and has two sons, Steven, Jr. and Christian, who live in Portland, Oregon. Dr. Bravard enjoys camping and hiking with Dawn and his two Australian Shepherds, Louie and Spirit. He also enjoys riding his motorcycle to and from his lake house in Hot Springs, AR as well as attending various motorcycle rallies.

Font Resize
Contrast
Accessibility by WAH
Call Us Text Us